We took a group of eager Cubs, Scouts and Explorers to experience the Pilots and Pillows Sleepover so they could work through their Air Activity Stage badges. 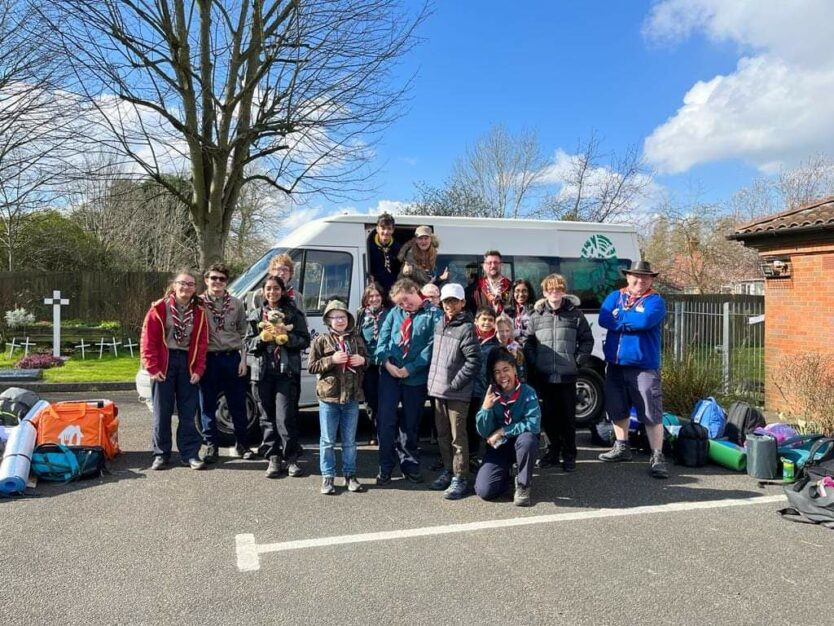 We took a group of eager Cubs, Scouts and Explorers to RAF Cosford to experience the Pilots and Pillows Sleepover for 2022 so they could work through their Air Activity Stage badges.

After arriving at the church, we all piled into the minibus and car, our driver Kaa and Rusty in the bus, and Sparks in convoy, we started our Cosford sleepover adventure! After an hour or so of having lots of weird and random chats about Harry Potter, spotting blimps over the motorway and singing (even I tried to serenade them on the motorway, and apparently I am not as good as I thought!) we arrived through the gates. It was that moment we realize how amazing the weekend was going to be!

The first couple of hours, we started outside view some of the old war planes before working our way through the first 2 bunkers of cool aircrafts from around the world. By the time we had worked through our activity sheets, it was time to meet up with Q and Baloo who came to visit us on site and bought boxes and boxes of pizza. Feeling rather full, we carried on to the Cold War hanger where by now the site was close to the general

public. We had the whole site to ourselves with approx. 300 other young people from groups around the UK. So now ITS PARTY TIME 🥳!

We got the opportunity to do lots of different activities that had been put on by the staff at Cosford. The evening started with making a sleeping mask using our own crazy designs. Some were amazing. . . some were weird and funny with googly eyes, and we found out later that feathers and face masks should not be mixed!

Onto the next activity. . . As a Beaver Leader I know my party songs, it was at this stage we noticed the silent disco. We found out that not one of our youngsters had been to a silent disco before, so Kaa and I got headphones on the lot of them and off we went dancing – leaving Sparks to wonder around to enjoy the views of the planes.

After an hour of dancing to Saturday Night, Macarena and other Party anthems I decided to try and sit down and have 5 mins rest – well 325 decided for us!

Next activity, the Leaders were dragged into the photo booth where we all threw on some silly costumes. Throughout the night we had paper plane throwing competitions and had opportunities to sit in some old planes – this is normally out of bounds for the public so was a brilliant experience for all of us! To cap the night off, we all split ourselves into groups and had a go on the 3D virtual plane ride. It was epic!!

At around 10pm we were directed to where we were sleeping. It was in the coolest hanger the Cold War section! We were shown our sleeping area which was taped off specifically for our group and we got sorted for sleeping under a de-polarised missile, yes you read correctly, we slept under a MISSILE! At this point the children had the opportunity to go and watch a movie in the theatre area of the hanger, however most of us due to us being soooooo busy during the day, were so exhausted we decided to have an evening snack and a hot drink and bunk down in our sleeping bags.

It was very cold night in the hanger but what an experience. It’s one I won’t forget in a hurry! In the morning we had a light breakfast snack and had a last look around the final hanger before visiting the shop. After having a little play on the play area equipment in the sunshine, yes even us Leaders had a go, we loaded our gear onto the minibus and headed back to HQ.

I think we all agree that it was a brilliant and amazing sleep over experience, and like many of us, I can’t wait to sign up for the next camp!! Well done guys, you are a credit to 325!